Some rushed thoughts on narrative pacing…

I have started thinking about the question of narrative pacing or, to phrase it another way, literary rhythm and tempo. This rhythm is at work at the level of the sentence, the paragraph and the text as a whole. It is vital to the success of any piece of writing.

The best texts show an awareness of this. Just think of the way that the rhythm of Elizabeth Gaskell’s ‘condition of England’ novel Mary Barton (1848) markedly changes in its final third. Here, we find a kind of literary accelerando as the characters set off on a river chase. Think, too, of something like Proust’s modernist masterpiece, À la recherche du temps perdu (1913-27), which, despite its immense length, manages to engage with the reader every subordinate clause. For the mature Marcel, of course, this was simply a question of style.

Classic murder mystery texts can be a little one-paced at times. Whilst there is an inevitable speeding up of events as we approach the great detective’s gripping dénouement, the tone is too often too even, the beat just a little flat. From the opening line clues are scattered in front of us. Everything is important, even the unimportant red herrings. And, let's admit it, in this genre the writing is usually quite workmanlike. Neither Dame Agatha Christie nor Dame Ngaio Marsh were great prose stylists. Description is often left at the door.

It is for this reason that certain texts stand out. Take, for instance, the last book in the Poirot sequence (although far from being the last written), Curtain: Poirot’s Last Case (published 1975). This has an altogether different structure and pace. This is a murder mystery that for the most part lacks a murder. This a text of foreshadowing and nostalgic reminiscence.

For all that I love the classic mysteries I often wish that they were more stylish.
Posted by Dr Holden at 14:54 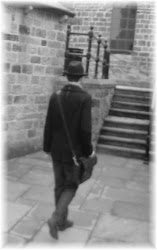